A family with a child on the spectrum will pay, out of pocket, $1.4 – $2.4 million for treatment and therapeutic services in their life time. To not be an additional financial burden on these families, we offer Surfing for Autism at no cost to the participants. To continue to do this, we need your help.

There are no paid leaders, staff, overhead, or administrative costs. Your donation helps a family caring for someone on the spectrum gain an experience that has been shown to impact them in powerful, meaningful, and life-altering ways.

Let people with ASD and their families know you care. Let them know they are supported. Show them that even though they have been created unique, they are loved uniquely as well.

Information based on JAMA Pediatrics research.

WHAT’S UP WITH THE MONEY IN THE CEILING?

Stick a quarter in the ceiling, make a wish, and when it falls down, the wish comes true. Okay, that’s not totally true…

For real though, back in the 1960’s, when this place was the Jockey’s Ridge Restaurant, people put change in the ceiling as a way to tip the servers. The owner of the original Surfin’ Spoon building, Dick Harper, suggested Jesse and Whitney bring the tradition back when they opened, and they did. Mr. Harper put the first quarters in the ceiling, and people have been following his gesture ever since.

Once winter arrives, the heat turns on, the wood shrinks, and the money falls. Surfin’ Spoon decided they wanted all money to go somewhere special. Jesse and Whitney gracious chose Surfing For Autism.

They want to show their love… show your love too- stick quarters in the ceiling next time you’re in the shop! Since 2013, Surfin’ Spoon and it’s customers have donated over $18,000. Yewww! 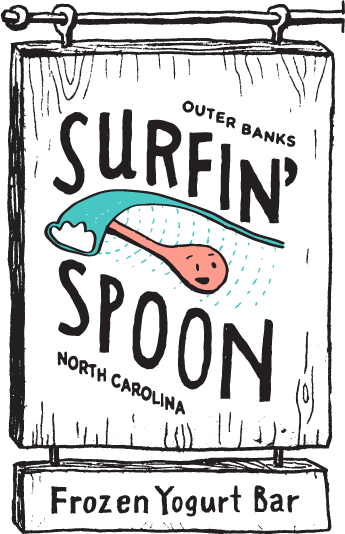 Our online, socially distanced silent auction from July 6-13 was a huge success. Thank you to everyone who bid on items or encouraged more bidding through their bidding. Even though you can’t bid on anything, you can checkout the auction and see what was there – stuff like sand bar jewelry, gift certificates, good eats, great places to spend the weekend, amazing art, Outer Banks experiences, merch, and more.

Just a few of the items up for bidding. Enter the auction to see it all.